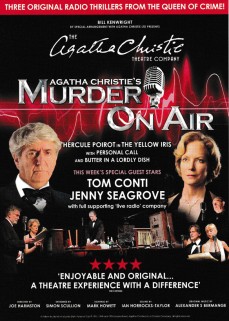 Murder On Air by Agatha Christie

Three gripping radio thrillers from the Queen of Crime, read in an authentic studio setting with live sound effects, in the style of their original BBC broadcasts. Joining each performance will be two special guest stars accompanied by a full supporting company of players.

*****  ‘Enjoyable and original. A theatre experience with a difference.’